At school and university, we are constantly taught that only facts and rational, logical arguments matter. Then we enter the workforce. People’s responses seem to be driven more by feelings than by facts.

Wouldn’t it be great if we “unemotional” types could figure out how people were feeling? Maybe we wouldn’t “put our foot in it” so often. Maybe we might find it easier to handle customers/bosses or colleagues.

There is! It’s a technique life coaches use. It’s called “listening for emotion.”

What To Listen Out For

There are five areas to home in on…

Listen carefully when someone uses “emotion words” such as “this made me really angry,” “I was scared to death,” etc.

This might sound like an exaggeration, but it tells you how the speaker feels about the situation. To find out more, you might want to ask: “What was it that made you so angry/scared?” etc.

When your speaker answers, stay silent and listen carefully to what they say. You might learn something that will help you see things from their point of view.

Sometimes the message is in what is not said. This often happens when you are on a customer’s site, and two colleagues are talking. One says something like: “Well, George will be George…” and the other just exchanges a glance with the first.

We can infer that both colleagues find George difficult to deal with. If George happens to be a key influencer for you in the company, that can be useful to know.

As you listen to a person’s voice, you get an idea of what tone is “normal” for them.

At some point, you may notice that the person’s tone gets lower.

This may signal a change of mood. Ask yourself: “What triggered that apparent change in mood? What were we talking about at that point?”

By matching a change in the tone of voice with a change of subject, or in response to something you or someone else said, you can tell if you hit a nerve that you might otherwise have missed.

Depending on the situation, this might be an area to avoid or probe further.

As you talk to the other person, you will get an idea of how fast they normally talk. Once again, watch out for any sudden change of speed.

If a person suddenly starts talking faster, they may feel uncomfortable and want to get past this topic as quickly as possible.

If a person hesitates, they may be unsure of what is the best thing to say to achieve the desired result.

Either way, they appear not to feel as comfortable as they did a few moments ago.

Once more, ask yourself: “What triggered the apparent change in mood? What were we talking about at that point?”

This may reveal what the “elephant in the room” really is.

How loud is the person talking? Think about how the person is speaking at the start of the conversation and how they change their volume.

Many people will focus on a person who gets louder during the conversation, but in fact, it’s often when they get quieter that is more revealing. This happens when the conversation has taken a turn that they do not find comfortable.

Our favorite questions, “What triggered the apparent change in mood?” and “What were we talking about at that point?” will serve you well. 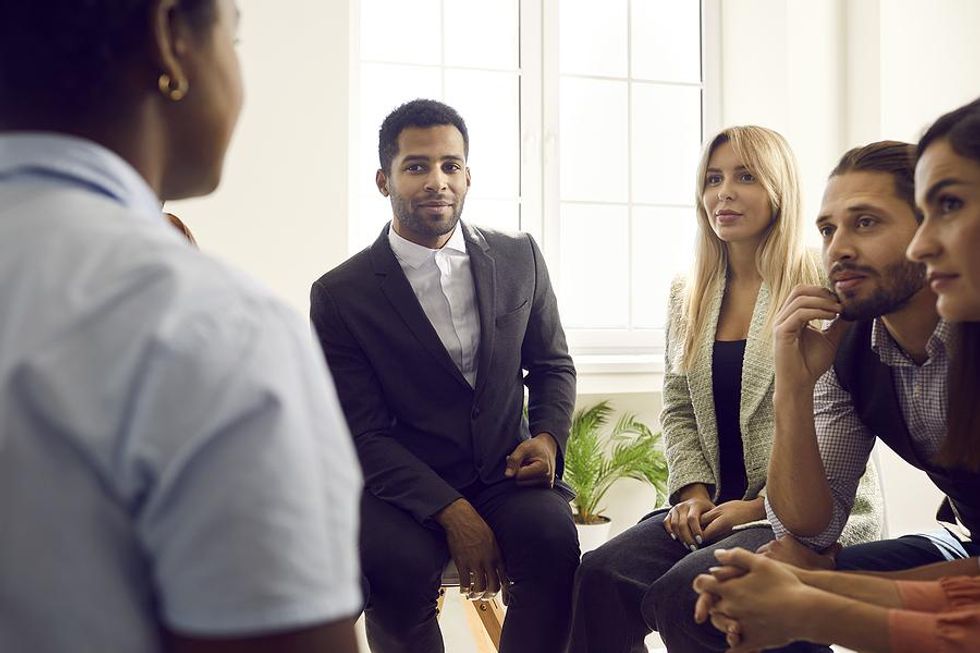 Once you get used to the idea, you will realize that these changes rarely happen in isolation. A reduction in volume usually comes with a reduction in pace.

If you are talking to the person face to face, this may also come with the person turning away from you.

You have many opportunities to practice and perfect this skill.

Watch films where the acting is considered good, and conversation is a major part of the film. The opening scene of the Godfather, where various characters come to Don Corleone asking for favors at his daughter’s wedding, is a classic example.

Watch interviews. A couple of classics would be David Frost’s famous interview with former President Nixon after he had been impeached or Emily Maitliss’ interview with Prince Andrew. The Michael Parkinson celebrity interviews often revealed unexpected emotional depths.

If you are talking in a group, try observing the other people’s behavior more carefully. You may need to talk less yourself to give yourself time to observe. What you see may be quite revealing.

Michael Crighton, in his novel Rising Sun, observed that Japanese managers will often deliberately take a “back seat” at the start of a negotiation, partly to give junior colleagues the chance to gain experience, but also to observe the other party without having to think about what they are saying first, and so gauge the other person’s vulnerabilities before stepping in to close the deal.

The final stage is to start evaluating the other person’s emotional state as you are talking to them yourself. You will find this exercise gives conversations a whole new depth.

You may find this interesting too: Pulling The Tiger’s Teeth: How To Deal With Angry Customers

20 Jobs that Can Make You a Billionaire

Fight for Your Career with These 4 Things

35 Christmas Office Party Games to Up the Festivities

With an Unusual Model and ‘Forbidden Courses,’ a New University Is Taking Shape in Texas

CEOs at Davos weigh in on quiet quitting: ‘We need to think differently about work.’

ChatGPT Has Colleges in Emergency Mode to Shield Academic Integrity

How to Learn React: A Step-By-Step Guide