Correctional officers form a vital part of the criminal justice sector, working in prisons and other correctional institutions to keep inmates on the path to rehabilitation. The role goes beyond many people’s perceptions of a prison officer, and, as you might expect, can be incredibly challenging, as you will need to work with some very dangerous people, as well as have the patience to work with those who have no interest in being rehabilitated.

What correctional officers do

A large part of correctional officers’ work is keeping inmates under supervision, performing roll calls and patrols, and responding to any emergencies as needed, sometimes using force if necessary. Correctional officers must understand when this approach is necessary and must always exercise restraint and prioritize dignity above all else.

Correctional officers work with prison management (such as wardens) to create an institutional environment that is positive and geared towards rehabilitation. This might include giving inmates work responsibilities, designing programs inside and outside the prison to support and enrich inmates’ lives, and collaborating with other criminal justice employees like psychologists and parole officers to support inmates.

Here are the main responsibilities of a correctional officer:

Correctional officers will spend most of their working time in prisons, although from time to time they will need to attend offices and support facilities, as well as attend offsite training. When in their prisons, correctional officers are bound to strict procedures and regimented ways of working that guarantees the safety of everyone at the facility.

Correctional officers need to spend extended periods of time on their feet, and lots of walking is involved. Due to patrols and observational duties, the role might be quite monotonous. That said, correctional officers also benefit from a very social environment; not just interacting with colleagues, but often forming long-term relationships with inmates as well.

Given the need for constant supervision in prisons, correctional officers will need to work shifts, and this includes weekends and night shifts as well. The role can be equally split over a five-day working week, but other patterns, such as four twelve-hour shifts, followed by four days off, are also common. Correctional officers need to respond to whatever is happening at work, and therefore will frequently be asked to work overtime or remain on shift a little later than planned.

Correctional institutions are generally very safe places, and while the threat or risk of violence from inmates can never be fully mitigated, the vast majority of interactions with them will be positive and peaceful. Nevertheless, correctional officers need to be ready for any eventuality or simply be careful of getting caught in the middle of a fight between two inmates.

The job of correctional officer can be very frustrating and difficult, and it might come as little surprise that the levels of job satisfaction for the role are not as high as other occupations.

Common frustrations with the job include the salary, as well as some correctional officers finding a lack of meaning in what they do. That said, many correctional officers are very satisfied with their job, because of its purpose and importance to society. Generally, job satisfaction tends to increase the longer someone is working in the role.

This decline is driven in part by a decrease in public spending both in the US and in many countries worldwide, meaning that state-funded roles are heavily critiqued before being backfilled. Additionally, the US is looking at ways to reduce the cost of keeping people in prison, with shorter sentences, more community programs, and different laws all impacting the volume of inmates, as well as how long they are incarcerated. 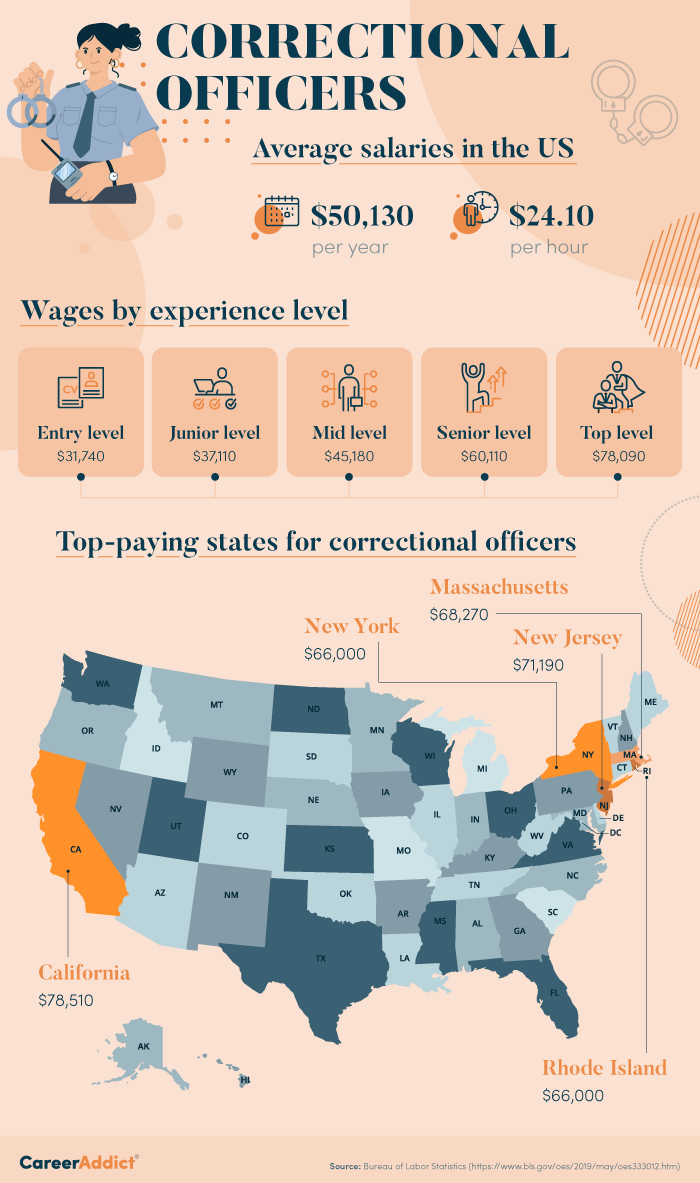 Correctional officer jobs require the use of many skills and abilities. Here is a list of the main skills and attributes needed for success in the role:

The Best Criminal Justice Jobs in the World

Steps to become a correctional officer

If you have read this far and feel that becoming a correctional officer is the job for you, then read on to discover more about how to get into this career.

Step 1: Determine if it’s the right career for you

You must spend some time carefully thinking about whether such a challenging role like correctional officer is one for you. Given there’s more to the job than observing inmates, having only a passing interest in law enforcement might not be enough alignment for you to be truly energized by this role. If you are passionate about helping people and encouraging them to improve and better themselves, then this might indicate that the role is a good fit with your career goals. Having skills that align with the ones needed to be a correctional officer is also important.

If you haven’t found a perfect career yet, then don’t panic as you won’t be the only one! One thing to consider taking is a career interests test, such as CareerHunter’s six-stage assessment. This maps out your career interests and skills to various career paths, helping you find one that you will really enjoy.

Correctional officers at local and state level are required to have at least a high school diploma. Focusing on the right subjects at school is a good place to start here, with business studies or English being good subjects to focus on. Physical education is also beneficial, as are foreign languages.

Further education can be specific to the job, such as a college education or an associate degree in a subject, like a degree in corrections. There can also be courses that can be taken at evening school or similar, such as courses on criminology, corrections, or law enforcement.

A bachelor’s degree is essential for correctional officers at a federal level. Subjects like criminal justice, criminology or law enforcement are a perfect fit, and can often be taken with electives focusing on corrections. These degrees are an especially good idea for anyone wishing to progress in their corrections officer journey, hoping to become a team leader or manager.

There are stringent minimum requirements for aspiring correctional officers to be accepted in the role. As well as the educational requirements mentioned above, there’s a minimum age to work in the role (21 years old at the time of appointment for federal prisons and 18 for state and local prisons), pass a criminal background investigation, as well as having no disqualifying felony convictions.

Correctional officers must also pass a physical fitness test, have a stable financial history and be a US citizen. State requirements (for state and local prisons) might vary and include elements such as experience requirements, having a valid driving license and passing medical examinations. Many states also hold entry examinations focused on testing the knowledge attained as part of the educational route.

Once hired into a correctional officer role, you will need to undertake plenty of on-the-job training. The purpose of this is to ensure that you are keeping yourself, your colleagues, visitors, and inmates safe. Correctional officers need to be trained in many different procedures. These are all in place for a reason, and any deviation from these can have very serious consequences.

Step 5: Get sworn in and begin further certification

Correction officers will need to swear allegiance to their state’s Oath of Office (sometimes called an Oath of Honor) that governs the expectations placed upon them in the role. The oath might cover elements like the duty to keep order and supervise inmates, searching for contraband, inspecting facilities, reporting and responding to inmate conduct, and assisting in the rehabilitation of inmates.

Is this the right career for you? Take our CareerHunter tests to find out!

Being a correctional officer is a challenging role. It involves long hours and potentially managing people who don’t want to be reformed, as well as dealing with the pressure and challenges that come with working in a prison. That said, the role can be hugely rewarding. Prisons are often likened to close-knit communities, and you will develop close bonds with colleagues and prisoners.

Helping people improve themselves and work towards rehabilitation can be inspiring to be a part of, and for that reason, being a correctional officer could be a role you might genuinely wish to consider.

Are you interested in becoming a correctional officer? What is it about the role that appeals to you? Let us know in the comments below!

7 Steps to Successfully Rolling Out a New HR Initiative

What To Consider When You Leave Friends Behind At Work

What To Consider When You Leave Friends Behind At Work

How Can Employers Improve Recruitment in 2023?

How To Grow Your Professional Network For Career Success

The #1 Skill Executives Need To See In Every Employee

Futureproof your family-building benefits with these 4 strategies

The comprehensive list of HR trends to watch in 2023

Climate Change Took a Heavy Toll on the U.S. Last Year. What’s the Cost to Education?

Missed the Mark on a New Year’s Resolution? Don’t Panic