Few career paths appear as glamorous as that of a pilot. A job ideal for those with a head for heights as well as a yearning to see the world, being a pilot is also currently an in-demand career. There are many different types of pilot, but whichever one you are thinking of pursuing, get ready for plenty of work and training.

Being a professional pilot is a very responsible and complicated job and requires lots of preparation to become one. So, if you want to earn your wings and take your career into the air, then read on to learn more about being a pilot.

Ultimately, pilots are employed to fly an aircraft, such as an airplane, blimp, or helicopter. They transport people or cargo from one destination to another, or undertake certain tasks in the air, such as crop-spraying, flying billboards, or, in the case of air force pilots, complete various military objectives. Aside from their core task, pilots have plenty of other things to do on the ground as well.

Pilots will typically have to perform various pre-flight tasks. At the very least, this will be mapping out flight plans and performing cockpit checks of their aircraft to ensure everything is OK. Some pilots, especially those in charge of smaller aircraft, might also perform other mechanical checks of the machinery to ensure it is airworthy. All pilots will then perform safety checks and instruct any cabin crew present to do the same.

During the flight, pilots must ensure the safety of everyone on board and ensure the aircraft, whether on autopilot or under manual control, is operating as it should. Pilots might only need to program flight paths, but will be expected to assume full control and take responsibility in the event of an emergency.

There is more to being a pilot than flying passengers around the world for an airline. Pilots can qualify to operate commercially or for another sector, in many different types of aircraft. Here are the five main types of pilots:

The Top Skills Needed for a Job in Aviation

Whatever the type of pilot, their basic duties remain the same. Here are the main responsibilities of a pilot:

Being a pilot is often portrayed as a glamorous and exciting job (who can forget Leonardo DiCaprio in Catch Me If You Can?), but there’s a lot more to the job than flying planes and staying in hotels. The role is not only incredibly responsible and potentially stressful, but it also involves long hours and challenging work schedules. This section takes you through what it’s like to be a pilot.

A pilot’s main place of work will be the aircraft they fly, but there will also be plenty of time spent on the ground as well. Pilots will need to spend lots of time in flight simulators and classrooms getting retrained and refreshed on flight processes. They will also need to go through flight plans and spend time with ground crew. Long-haul pilots will typically need to spend plenty of time away from home and will stay in hotels between flights. The role is very dynamic, and you are always on the move.

Away from work, pilots also must always keep their profession in mind. On their days off, they will not always be able to stay out late and will need to get plenty of rest and be careful about consuming alcohol, due to rest and flight regulations.

On average, pilots spend 225 hours per month working, but most of their time is spent on the ground, undertaking planning and training duties. Commercial pilots fly around 75 hours per month, with extensive rest breaks in between (a twelve-hour rest break is usually mandated between trips).

A pilot’s working pattern is often very flexible, and many pilots will spend time “on call”, which means they need to remain at home or in a hotel in case they are called up to cover absence or changes in flight schedules. Many companies will allocate flight schedules to pilots based on their seniority, with the most preferred working patterns being awarded to those who have been working there the longest.

The BLS note that pilots have one of the highest fatality rates of any occupation. This is mostly driven through the principal occupational hazards of stress and exhaustion. The long hours some pilots must work contribute to fatigue, and long-haul pilots will also be affected by jet lag.

Stress is caused through needing to concentrate for extended periods of time and working in cramped proximity to other people. Other occupational hazards include noise (many pilots, especially those in smaller aircraft, wear ear defenders) and hazards in and around busy airfields.

Pilots generally report their job satisfaction as being a mixed bag. Whereas pay and benefits are generally considered to be very good, pilots also value their job for being exciting and offering a varied working day. Many pilots, especially those in command of smaller aircraft, also like the feeling of being in charge, and value the responsibility of being in almost total control of an aircraft.

Nevertheless, many pilots express dissatisfaction with the long working hours and high levels of stress that the job exposes them to, with many pilots feeling that ever-greater expectations from their employers mean that these issues are getting worse. Although pilots are required to retire at the age of 65, many pilots have reported that they don’t want to remain in the job for that long.

Despite taking a hit during the COVID-19 pandemic, when lots of pilots were laid off, the aviation job market has bounced back remarkably, with the US Bureau of Labor Statistics (BLS) putting job growth for the pilot occupation at 11% year-on-year, with over 18,000 vacancies opening every year until 2031. This is more than double the United States’ average occasional job growth of 5%.

Since the pandemic abated, airlines and cargo carriers have been rushing to recruit pilots to keep up with hiring needs, and other types of pilots — especially private pilots — have also experienced an uptick in demand.

The average salary for a pilot is $198,190 per year, making it one of the highest paid jobs in the US. This is far higher than the United States’ national average salary of $58,260 ($28.01 per hour). The role has a high average salary to reflect its complexities and responsibilities. Pilots can earn bonuses and overtime, too.

Here’s a quick summary of salaries for pilots: 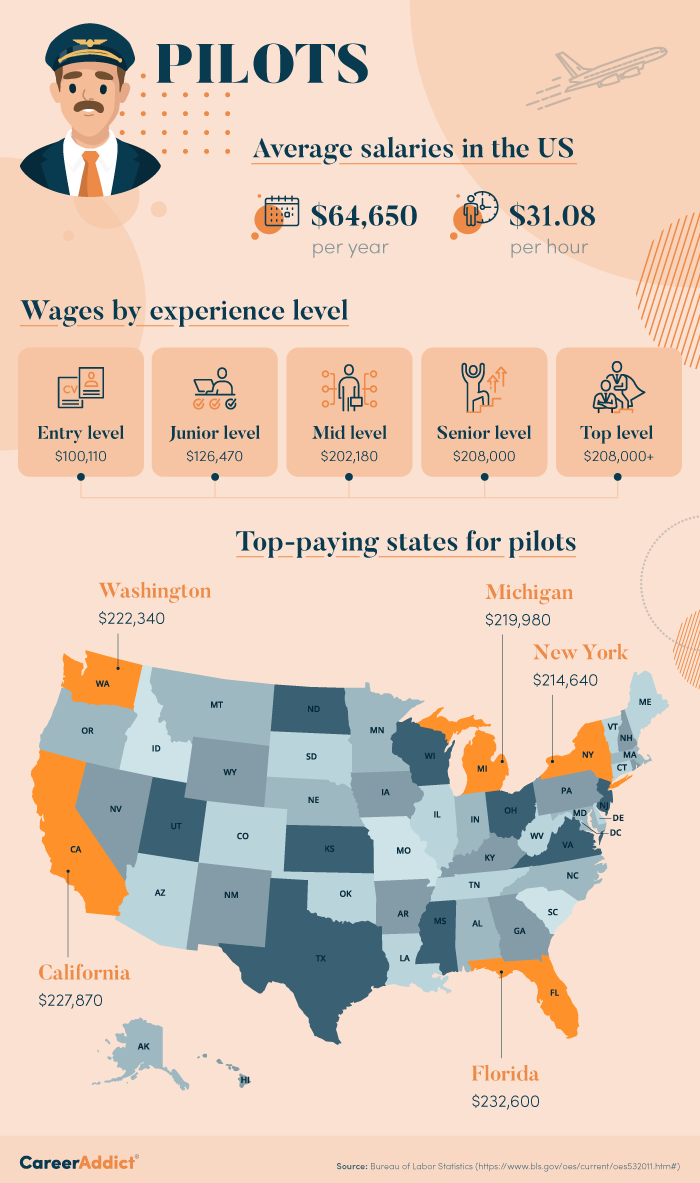 As you might expect, pilots need to have an excellent command of a wide array of skills, some of which take plenty of fine tuning. These skills are broadly the same across the different types of pilots. Here are the top six skills and attributes needed for this profession:

Steps to become a pilot

If you have read about what being a pilot is like and feel that this is the ideal career for you, then read on to discover more about how to become one.

Step 1: Determine if it’s the right career for you

To determine if being a pilot is the right career for you, think about whether it is one that is aligned to your skills and interests. If your skills match the ones listed above needed to be a pilot, and these are skills that you enjoy using, then this is a great start. If you are interested in a career in flight, enjoy going places and traveling the world, then even better!

Some people are not sure what job their skills and career interests might align with and therefore struggle to map out a career plan. This is completely normal and something many jobseekers experience. If this applies to you, then consider taking a career test, like CareerHunter’s six-stage assessment. This assessment maps out your career interests and skills, recommending jobs based on what might be a good fit.

Step 2: Decide what you want to fly

One of the most important steps to becoming a pilot is to decide what kind of pilot you want to be and what kind of aircraft you want to fly. It might seem easy to flip between pilot roles and aircraft types as you go through your career, but this takes a lot of preparation and expensive retraining. Understanding what you want to do as early as possible will enable you to plan out your training path accordingly. You might also use this information to research air cadet programs, which offer a structured route into commercial aviation.

Whereas a bachelor’s or college degree isn’t completely necessary to become a pilot, some employers will want to see evidence of one. The best subjects will be engineering, business studies, or physics. The first formal educational step needed for budding pilots is for them to attend flight school. These are often very expensive, but if you join a cadet or pilot training program, this can sometimes be sponsored by an airline. The flight training and flight schools will be part of your learning, and at the end of it, you might be offered a trainee role with the company.

The FAA has a list of accredited flight schools that offer training. “Part 141” schools offer a more thorough and regimented training path, and “Part 61” schools offer more flexibility on a smaller scale, allowing the instructor to change the curriculum to the needs of individual students.

When it comes to progressing as a pilot, logging flight hours and experience is very important. When you start out flying, you will need to log at least 40 hours of flight time, including ten hours of solo flight. This will enable you to attain your private pilot license. Further flight time and credit hours, often gained as part of a cadet program and supporting other pilots in their duties, will enable you to work up to becoming a commercial pilot. Once you have this license, you can apply for professional pilot roles and fly for a major airline.

Is becoming a pilot right for you? See how your interests and personality match up with our CareerHunter assessment!

Being a pilot is an exciting job that offers you a great salary and opportunities to travel the world. It’s vital that prospective pilots understand the less glamorous aspects of the role as well, as these reflect the challenging realities of being a pilot.

If you want to make the leap into this profession, consider making a long-term career plan. Be prepared for plenty of training and the steps to become a pilot. The world needs pilots right now, but the nature of the role means that despite the demand, you need to be dedicated, talented and prepared to execute this very responsible job to the best of your ability. Good luck!

Are you interested in becoming a pilot? What is it that appeals to you? Let us know in the comments below!

What can HR expect after the midterms?

Employee surveillance is a counterproductive ‘shortcut’ for managers, executive says

A Guide to Becoming a Genius: 20 Steps to Follow

The Ultimate Guide to High-Paying Jobs Without a Degree

3 benefits of being a more self-aware HR leader

Almost half of workers say belonging programs have failed them, survey says

The Employee Compensation Package: What to Include and Why

My Students Deserve a Classroom. Instead, I Teach Them in a Hallway.

How To Write A Cover Letter That Stands Out To Recruiters

Best Jobs for People Over 50