15 Examples of Bad Office Etiquette and How to Fix it

Being professional in the workplace is essential, but occasionally, when we get too comfortable in our role, we tend to forget common office etiquette and end up developing some very bad habits. Whether it’s something like taking personal calls at work or eating smelly food at your desk, there are a lot of actions that fall under bad office etiquette.

And while you might think these small instances don’t affect your career success, that’s not necessarily true. Good workplace etiquette is important when you want to excel in your career.

So, if you’re unsure if you’re guilty of bad office etiquette, here is a list of actions that fall into this category.

1. Interrupting coworkers when they are speaking

Are you guilty of butting in when someone else is speaking? Whether you do it intentionally or not, it’s rude to interrupt someone else while they are talking. Even if you don’t agree with what they are saying, allow your colleague or manager to finish their train of thought before you share your views and opinion. It’s important to have an open line of communication in the workplace, allowing each person to share their ideas and effectively collaborating on given task and projects.

2. Being unresponsive on chats

Whether you’re working in an office or remote environment, you’re likely going to have a chat system where you liaise with your colleagues on certain projects or communicate with coworkers in other departments. These systems are put in place to ensure there’s fast communication between teams, so if you’re one of those people who tends to read a message and then ignores it, or simply doesn’t bother to open the chat, then you’re showing a lack of good workplace etiquette.

Especially if you work in a remote setting, it may seem that you’re not actually in front of your computer or are not doing the work that you should be doing. So, always be responsive to your colleagues, and if you really need some quiet time, set your status to busy (explaining what you are doing) and pause notifications until you’ve got through all your important tasks.

If you’ve been invited to a meeting, it’s expected that you should attend. If it’s a meeting in the office, it’s important that you turn up five minutes early, prepared with a pen and paper to take notes. And if the meeting is online, it’s expected that you keep your camera on (unless everyone else has theirs turned off, too). There’s nothing more awkward than the whole team communicating via a video call, and one person chipping in with just their voice every now and again. So, if you’re a serial meeting skipper, it’s time to reset your ways and make sure that you’re present and active in every meeting that you have.

Let’s say you don’t skip meetings altogether, but dash out early, it’s also a sign of bad workplace etiquette. It shows that you’re not interested in what your peers have to say and also have little respect for the host of the meeting. If the meeting isn’t offering much value to you, speak up to suggest regrouping with people who would benefit from the meeting, but don’t just storm out or hang up because you feel like it. There are lots of ways you can make meetings more successful and productive, so you don’t feel the need to walk out.

5. Playing on your phone

Are you guilty of cheekily checking your besties Instagram story, taking a 5-minute TikTok break or liking your favorite aunt’s Facebook post? If so, you’re doing yourself no favors when it comes to workplace etiquette and productivity. It’s not only rude to be sitting there playing on your phone during office hours, but also goes against your workplace policy. Most offices have a no phone policy, so you don’t want to receive a warning for being on your phone when you shouldn’t. Save the scrolling for your lunch break, which will then give you something to look forward to.

Who doesn’t love a bit of workplace gossip? I know I certainly do! That said, you shouldn’t be known as the office gossip leaking everyone’s secrets. If you end up getting a bad reputation, you won’t be taken seriously or considered for upcoming promotions, since you’ve shown that you can’t keep confidential information to yourself. Also, you will end up getting on the bad side of those who have been the focus of your latest gossip updates.

7. Taking credit for other people’s work

The bane of my life is having to deal with a coworker who is constantly taking the credit for my ideas. So, for everyone’s good, don’t be that person. Put in the effort to come up with your own suggestions and stop using other people’s ideas as your own. By stealing ideas, you not only make yourself look silly, but also burn bridges between your colleagues and yourself. Originality is key when it comes to succeeding in the workplace and advancing in your career.

Have you ever heated salmon up in the office microwave? Remember the lingering smell that it left in the office? Yeah — that’s also an example of bad office etiquette. No one wants to smell fish or other stinky types of food while they are working — some might even be intolerant. So, if you’re unsure of what type of food is acceptable for your office lunch, just ask around to see what your coworkers are comfortable with.

9. Putting your phone on speaker in an open-plan office

There’s always one arrogant coworker who decides to put their phone on loudspeaker whilst they are on hold in an open plan office, but no one else wants to listen to that dreaded waiting tone, either! What’s worse is if they are shouting while having a phone conversation that everyone can hear as well.

10. Whistling at your desk

Chronic whistlers aren’t often aware that they are actually whistling. That said, if you’re someone who likes to whistle a lot, be mindful of where you do it. It can be increasingly annoying in an office setting when your colleagues are trying to get their head down and their work done.

Do you have somewhat of a foul mouth? While you can swear comfortably at home, it’s quite unattractive for someone to swear in a workplace setting. There is a time and place to use bad language and the office isn’t one of it. So, try to avoid using bad language at work and leave it for out-of-office hours only.

Inappropriate Words and Phrases to Avoid at Work

12. Going into the office when you’re sick

A lot of people think that they are hard-working and dedicated to their work if they go to work while they are poorly. But the truth is actually much different — everyone will spend their days avoiding you if you’re sick, so they don’t catch your germs, too. So, if you’re sick, be considerate to those around you and ask to work from home, or just take the time off to recover.

Are you a judgemental person? Are you overly critical of the work of others? While you may think that this is a good thing, it can actually come across as quite rude and condescending. Let’s say that you’re a lead designer; don’t knock your colleagues’ work based on personal opinions. Instead, try to guide them with valid reasoning and examples to show that you aren’t being critical, but have valid suggestions to make.

14. Leaving people out of work events

Do you arrange happy hours after work but avoid inviting the office Karen? While she might be super annoying, it’s not nice to make anyone feel left out. So, when it comes to rounding up your coworkers for a social event, be sure to send out a message to the entire team. It doesn’t mean that you have to be Karen’s workplace bestie, it just shows that you’re mature and cordial toward all of your coworkers.

15. You have bad email etiquette

Do you open an email with “Hey dude”? Or “sup”? If so, it’s clear that you have bad email etiquette. Even if you’re writing an internal email, it’s essential that your emails are professional at all times. Open with a formal salutation like “Dear John,” and be sure to sign off with a professional closing term like “Kind regards”, followed by an appropriate signature. You never know who’s hands your email will fall into, so you always want to give a professional impression.

If you’ve read this article thinking “Oh, I do that quite often”, then it’s time to change your habits and adopt a more positive workplace etiquette. That said, don’t be too hard on yourself! It’s never too late to change your ways and become more professional in the workplace.

If you want to improve your workplace etiquette, follow these tips: 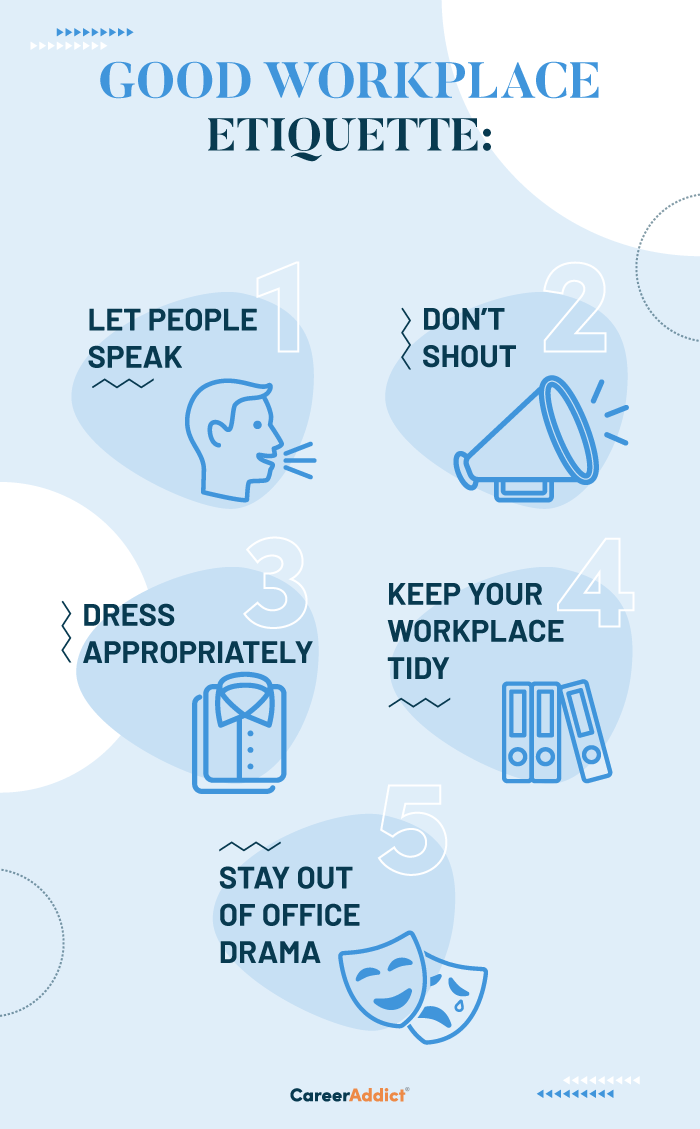 Are you guilty of any of these? Let us know in the comments (no judgments!)

I Am a Teacher. Here’s How I Want to Be Armed.

Consumer Board: Transcript Withholding Is Abusive

Data Never Sleeps. How Actionable Is Your Reporting?

How to Write an Academic CV (Structure, Tips and Example)

Rethinking Workplace Culture to Win the New Contest for Talent