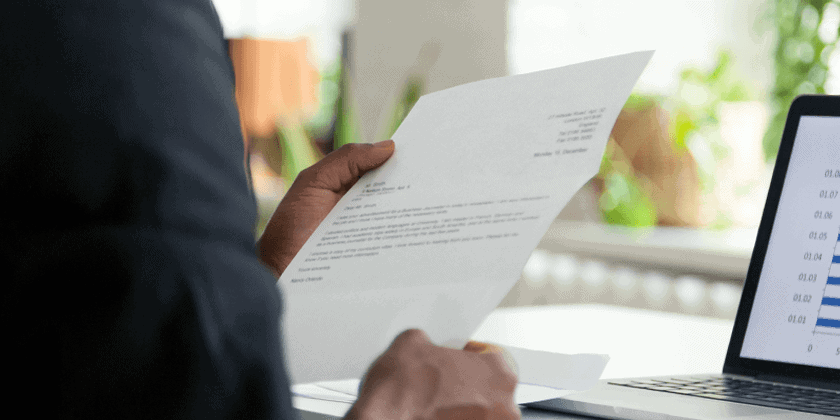 Writing a cover letter can feel like a struggle between simply checking all the boxes on your job application and using the opportunity to show what makes you a uniquely qualified candidate. One part of the process that often flies under the radar is how to end a cover letter.

The end of your cover letter should not be underestimated in its ability to help you move forward in the hiring process. After making your case in the previous paragraphs, you need to end your cover letter with a strong call to action to entice the recruiter to invite you for a job interview.

Madeline Mann, an HR leader in the technology industry and creator of Self Made Millennial, says that while no conclusion will save a bad cover letter, it can distinguish you from another good candidate.

It’s all about enthusiasm, according to Madeline. “Companies want people who want them,” she says. If you can draw to the company’s values and show how interested in working with them you are, that’s a substantial advantage. Create a lasting impression by incorporating that enthusiasm in your cover letter ending.

A good conclusion, in fact, should reflect the rest of your cover letter.

Alternatively, the middle part of a cover letter can also serve to handle objections and get facts across, according to Austin Belcak, who founded Cultivated Culture and helps people in their career changes.

Sometimes, you don’t have the traditional background or experience for the position you’re seeking. You can still make the case that you can do the job, but you have to prove yourself through your knowledge and ideas.

“You need to show the company that you’ve researched their issues, values, and goals,” says Austin.

Austin suggests leveraging the middle of your cover letter by highlighting what he calls a “value validation project.” For example, one of Austin’s clients wanted to get a user experience designer position at Airbnb, but she had no experience in the field. Instead of simply explaining in her cover letter that she was capable of changing career paths, she instead spent time researching the issues Airbnb users were facing.

After presenting her ideas to the company she landed an interview so they could discuss her findings. She had something the company wasn’t going to let slip away. That allowed her to end her cover letter with a strong call to action.

Even if you’re not able to create a slide deck or complete a project for your prospective role, the middle of your cover letter should focus on how you will add more value to the company than the next applicant. This will give you a better opportunity to stick the landing with the end of your cover letter compared to a generic summary of your resume.

Ending with a call to action

When ending a cover letter, you may be tempted to write that “I’m looking forward to hearing from you.” That isn’t a call to action. For Madeline, the end of a cover letter serves to give one last push and show interest and enthusiasm in a way that stands out.

For Austin, the call to action is all about enticing the recruiter through your value validation project, like his client at Airbnb. He suggests ending the cover letter saying that you’d love to hop on a call to get thoughts and feedback about the ideas you’ve outlined. It’s a simple, useful trick, which always pleases the employer.

How to end a cover letter (examples)

Mistakes to avoid when ending a cover letter

The mistakes people make when they end their cover letter are often the same ones they made earlier in the piece. However, they can be particularly detrimental to your chances of landing an interview if they constitute the final impression a recruiter has of you.

When ending a cover letter, avoid:

Don’t rely on your cover letter

If you’ve applied online, Madeline adds that you should “immediately send an email or a LinkedIn message to let the recruiter know you’ve applied if you submitted your cover letter into an applicant tracking system.”

Madeline also suggests using an email tracking app, like Mailtrack or Email Tracker. This way, you can follow up when you see when and how often a recruiter opened your email.

Read more about how to follow up on a job application here.